Many voters are angry, and want change. They’re not wrong, but that doesn’t really answer the question: What are the choices this election day? 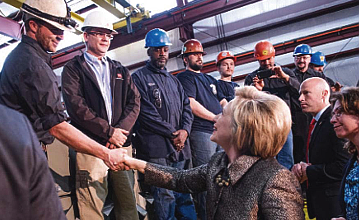 Hillary Clinton has policies that protect the security of our families, and takes the pressure off of the middle class.

Donald Trump presents himself as a successful businessman, but his record is anything but clear cut. He likes to pose as the man who shares the anger of people who work for a living. But, a closer look shows he’s wrapped up in the concerns of another way of life, another class altogether, the billionaire class.

He has found some takers in his political crusade. These are the reasons we hear: “He says what he thinks.” “He’s for change.” “He’ll make things work for us.”

Coming from paying guests at exclusive country clubs and people who spend thousands on a suit or a gown, that might make sense. But for anybody else, to think of him as “us” would be funny if it wasn’t so sad.

Trump is a piece of work. He’s the “honest” businessman who stiffs his contactors and dares them to sue him.

He’s the “patriotic hero” who told the draft board he couldn’t go because his foot hurt.

He’s the “tough guy” who hires thugs to beat up protesters and calls on his fans to do the same.

He’s the “savior of America” who imports workers from Mexico to work on his hotels, so he doesn’t have to deal with unions.

He’s the “self-made man” who grew up in luxury, and inherited his money from his father, a big landlord in New York with a strict “no coloreds” rental policy.

He’s the “straight talker” who has admitted that the big issue that launched his political career – that President Obama was born in Africa – was a lie. Five years after the president’s birth certificate was presented.

When we boil down this mess, we can see past his personality disorders –  Trump is the spoiled rich kid, the cry-baby who’s never satisfied, the business and tax cheat.

We can see him for who he is – a self-promoting suit who loves to see working men and women fight each other for crumbs.

This is the Republicans’ choice for president.

Hillary: fights for the middle class

The Democratic candidate, Hillary Clinton, on the other hand, is a politician with a clear cut record. That record includes support for labor and working families. She has policies that protect the security of our families, and takes the pressure off of the middle class.

She stands for unions, the real fighters for safe, good-paying jobs for workers so they can provide for their families, and has said labor will always have a champion in the White House and a seat at the table if she is president. Unlike Trump, she has been and remains against anti-union laws that strip our power and blocks workers organizing for their rights.

Clinton’s tax policy moves the burden where it belongs — corporations and the wealthy paying their fair share. She would close loopholes that corporations use to avoid paying taxes, and require millionaires to pay a tax rate at least as high as middle-class taxpayers pay. This is not the case today… a fact which Trump actually brags about taking advantage for himself.

Protecting retirement security for workers and their families is another Clinton pledge.  She supports strengthening and expanding Social Security, and has fought against efforts to privatize it or raise the retirement age.

Clinton supports raising the minimum wage, and supports expansion of overtime rules to millions more workers. She calls for a crackdown on employer misclassification, wage theft, and other forms of exploitation.

When Trump talks policy, he’s all over the place, but always getting back to “me, me, me.” Clinton talks about the real world, and has the background to prove she is no amateur with a “trust me” con game. The choice is clear

But, this year’s vote is not just about candidates. It’s about whether to increase the security and power of the real muscle, brains and bones of America – her workers – or to turn the clock back.

This year’s Presidential election, there is a clear choice.

A Trump victory would mean doubling down on giving business the means to line their pockets and the false promise that this will result in more and better jobs.

A Clinton win will be a victory for the middle class.